Well yesterday I posted about the lack of action at Eagle Dynamics and speculation about the application of resources for contracts that lock assets out of public release. Eagle Dynamics and The Fighter Collection have today released a Newsletter detailing where things sit for April 2015 and wow do they look good.

Each day we are making more progress in moving DCS World 2. Since the previous newsletter, the team has made great progress on AI landing logic, an all-new multiplayer interface that includes such features as Favorites and Filters, new smoke effects, improvements to the lighting and shadows, replaced the general ground texture with a higher resolution one, increased new terrain graphics performance, the ability to load and work with different maps in the Mission Editor, improvements to the Graphical User Interface (GUI), dedicated server, and a new protection system.

We often read questions regarding how the current Black Sea map will look in DCS World 2. Rather than try to describe this in words, we have included a non-edited gameplay video of the freely available Su-25T Instant Action mission “SAM Killer”. We hope this will paint a clear picture.

The new rendering engine ‘EDGE’ uses DirectX11 to give you the realistic lighting and shadows. Apparently the performance is boosted at the same time and they are improving support for multi GPUs. DCS World is already 64-bit only for addressing large amounts of ram, so this further takes the lid of bottlenecks in the modern PC (you hear that FSX fans?)

Not only that but the executable for the main menu and editor of DCS World (1) is a different executable to the simulation. This isn’t so in DCS World 2 as they’ve merged the two into a single executable that will handle both sides of the application and also support a new editor that let’s you flip to different maps.

The next DCS Model: L-39 Albatros

We’ve known about the Albatros for a while now. It’s a fairly old and well used 2 seater trainer and gives a lot of flexibility in letting players do training scenarios in a fairly straight forward DCS quality turbo fan jet engine. It’s also something that is used by so many countries you can make a huge number of situations to use it in with a switch of the livery.

We’ve just learnt from ED that this model may feature the first implementation of multi-crew inside the same aircraft. If this makes it into the beta it should give the multiplayer side of DCS a big kick.

Other aircraft confirmed to have the multi-crew feature includes the UH-1H Huey.

The next aircraft module to be released by Eagle Dynamics will be the L-39 Albatros. The front and back cockpit are nearing completion as you can see in the included video. This video also gives you another look at the Black Sea map in DCS World 2.

Primary aspects to still complete are an all-new external model and the completion of the cockpit systems and flight dynamics.

The biggest innovation for this aircraft, and a big part of our reason choosing it, was the inclusion of multiple network players in the same aircraft. This technology has been a big focus of the team as of late. This has also been a big reason for our re-design of the multiplayer interface. It is to be determined if this features will be part of the initial beta release.

The long awaited Nevada terrain has been showcased again in a video and I guess it’s now fair to say that this place is looking amazing. The ground detail is top notch and the frame rate appears to support it. Not to mention the video below features so pretty hair-raising flying skills that the FAA might be interested in reviewing.

Included is a video demonstrating the urban density possible with DCS World 2 and the tremendous sense of speed it provides when flying at low altitude. No, no time acceleration is used. 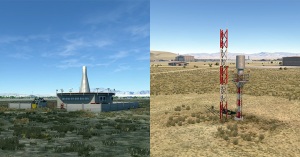 The strait of Hormuz is the entrance to the Persian Gulf. This little area brings together nations in what can potentially be a future flashpoint and a great location for both land and sea based aircraft operations.

When not working on the Nevada map, our map team is making steady progress on the Strait of Hormuz Map. Most of the airfields are now placed and a great deal of work is being done on manually improving the elevation mesh and textures. However, this map still has a long way to go with items such as airfield taxi routing, water textures, airbase lighting, ground object placement, navigation aids, and ATC still needed to be addressed.

Combined Arms is probably the module that has the biggest potential. You could turn this game into ARMA or a Real-Time Strategy game if Combined Arms took it there. Of course we have to be realistic that DCS World is primarily a flight sim, but one can dream. Hints are dropped here of unannounced new features and enhancements to come!

A lot of new work is going into Combined Arms in regards to improved user control (particularly from the external unit movement control), intercom messages, and improved AI. While a bit too early to show off these new features in this newsletter, we hope to be showing these advancements off soon.

Not much is added about the F/A-18C Hornet. This module is reliant on engine functionality that does not yet exist, so the work is primarily required on the engine to support ground radar.

Work is mostly focused on the air-to-ground radar that is making good progress; the team is now starting to create the various sub-modes such as the expanded modes. We have included a couple of images that show samples of the new air-to-ground radar technology that is based on radar reflectivity logic.

Other than that I was very happy to see on Facebook a post of work-in-progress pictures of the F-14. Leatherneck Studios, the creator of the AAA quality Mig-21bis are hard at work on this thing. It has a way to go and the renders aren’t from inside the sim, but wow! 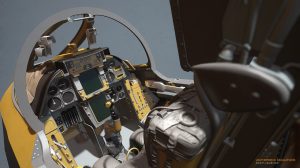 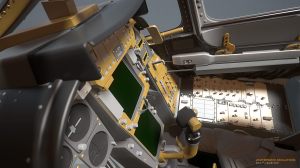 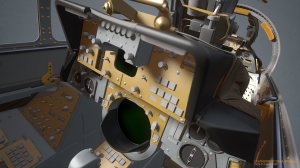 You can read more on the DCS Forum.